Mickey and Laura Hearne first opened the doors to Hearne’s Jewelers on June 3rd of 1972 in New Bern, NC. The business started as a dream and since has become more than the Hearne family could have ever imagined!

Mickey and Laura's love story sparked their want to be a part for the jewelry industry!  Mickey and Laura opened just another store that soon became a store like-no-other!  Hearne’s Jewelers became known as the store that combined both courtesy with integrity. Rather than solely focusing on sales, Hearne's formed its mission around simply making each customer happy. That mission has carried on and is the reason that we have such a loyal customer base!

Hearne’s Jewelers opened second location in 1989 at Rivertown Square. This location continued to flourish under the guidance of Mickey’s sons, Jimmy and Mike. In 2001, Mickey lost his battle to cancer; however, his legacy would not be lost as his son Mike stepped up and has since been running Hearne's Jewelers with his mom by his side!

While the storefront has changed over the years and employees have come and gone, Hearne’s Fine Jewelry is still practicing the belief on which it was founded- a store that focuses solely on the customer, not just the sale. With now three generations of Hearne's working in-store, Hearne's Fine Jewelry is a well-oiled machine. Whether you have been a customer for 50 years or it is your first time in, we cannot thank you enough for your support.

We are excited to be celebrating our 50th anniversary this year, and we are even excited to see what the next 50 years have to offer! 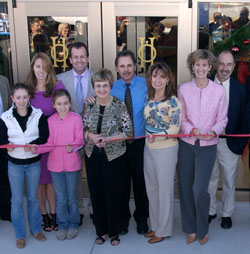